Varun Dhawan These days he is busy promoting the upcoming film ‘Jug Jug Jeeyo’. His opposite is Kiara Advani in the film. Apart from these, Anil Kapoor, Neetu Kapoor and Manish Paul are also in important roles in the film. Amidst the promotion of the film, a video of Varun is going viral. This viral video is from an award show. In this video, IPS Ajay Chaudhary of Gujarat and Ahmedabad Police are seen expressing their gratitude. He thanked the police and IPS for helping the victim of domestic violence.

Actually, amidst the promotion of ‘Jug Jug Jio’, a female fan suffering from domestic violence had sought her help. Varun Dhawan tweeted tagging the Gujarat Police regarding this woman’s case and after that the police took immediate action. Varun spoke openly to the media about this incident at the award show. He answered the media on the question asked on this matter. 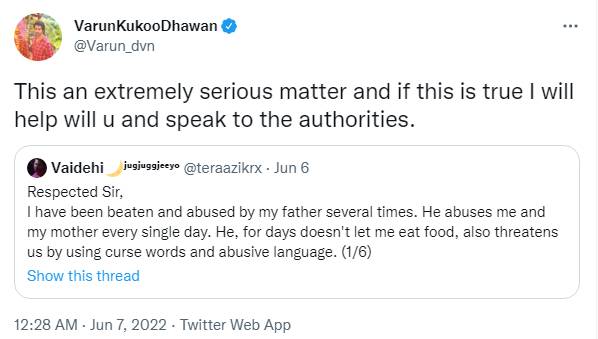 David Dhawan returned home from the hospital after treatment, said – ‘I am feeling better now than before’

Varun Dhawan started by saying that he was asked about this by about 10 handles on Twitter. He verified the matter with a journalist and then he also had friends from Ahmedabad who looked into the matter and confirmed that the woman was indeed a victim of domestic violence and then the matter was taken up legally as well.

Varun expressed his gratitude to IPS Ajay and Ahmedabad Police

Varun Dhawan thanked Ahmedabad Police and IPS Ajay Chaudhary for their prompt action and taking the matter into their own hands. Varun also appealed to the media that despite his involvement in the matter, it was shown less in the media, due to which he was very happy and appreciated his efforts.

Talking about the workfront, after the release of ‘Jug Jug Jio’, Varun Dhawan will be seen in ‘Bheliya’ with Kriti Sanon. After that, he will next be seen in Nitesh Tiwari’s next film ‘Bawal’ opposite Janhvi Kapoor.