IMDb’s year so far Most Popular Indian Films Movies released between January 1, 2022 to July 5, 2022 have been included in this list. These include movies that have got 7 or more ratings on IMDb. These movies have generated the highest number of IMDb page views in India within the four week post release window based on IMDbPro data. Kamal Haasan’s film Vikram is at number one, this film has got a rating of 8.6. After that there is superstar Yash’s film KGF Chapter 2. While Kamal Haasan’s film released on Hotstar has scored 8.6, KGF Chapter 2, released on Amazon Prime Video, has scored 8.5.

Vivek Agnihotri’s ‘The Kashmir Files’ broke records at the box office and on ZEE5. Stars like Anupam Kher, Mithun Chakraborty, Darshan Kumar, Pallavi Joshi and Chinmoy Mandlekar have been seen in this film. The film has got an 8.3 rating. Hridayam, released on Disney Plus Hotstar, has got a rating of 8.1.

In this SS Rajamouli’s magnum opus ‘RRR (Rise Roar Revolt)’ received love from critics and fans alike and the film was in the news for its release. It is a fictional story inspired by freedom fighters Alluri Sitarama Raju and Komaram Bheem, starring Ram Charan and Jr NTR in lead roles. The film also stars Ajay Devgn, Alia Bhatt, Shriya Saran, Olivia Morris, Ray Stevenson and Alison Doody. The film has an IMDb rating (8.0). The Tamil, Telugu, Kannada versions of the film are streaming on ZEE5. This film is also available on Netflix.

IMDB top 10 films of 2022: These are the top 10 movies and web series, this series is also included with ‘The Kashmir Files’

The name of Amitabh Bachchan starrer ‘Jhund’, directed by Nagraj Manjule, is also included in this list. It is a sports drama film and is streaming on ZEE5. The film stars Big B as Vijay Barse, a sports teacher from Nagpur who leads the football movement in the slums. It also stars Sairat actors Akash Thosar and Rinku Rajguru in pivotal roles. The film has an IMDb rating (7.4) and is an inspirational story. 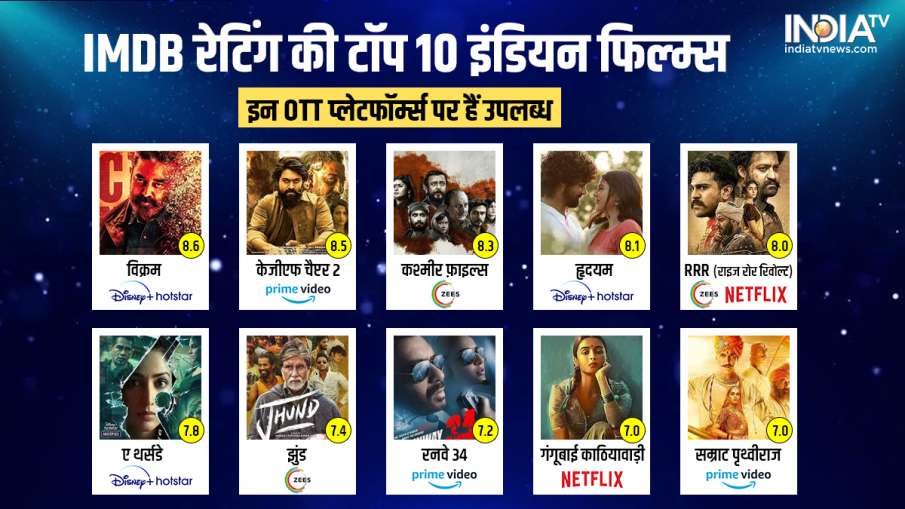 Madhu Sapre B’day Special: Once a bold photoshoot created a ruckus in the country, now Madhu Sapre has changed so much