Throwback: There are many names in the Hindi film industry that have been lost in the darkness of oblivion over time. The people of the new age know them little or they can say that they do not know at all. One such famous playback singer was Sudha Malhotra. Sudha is a name that is unknown to most of the listeners, but Sudha, who has given her voice in many films, not only did singing but also acted. In 1982, the song ‘Yeh Pyaar Tha Ya Kuch Aur Tha’ was sung for the last time in Raj Kapoor’s film ‘Prem Rog’. Sudha, who sang dozens of songs in the fifties, had a classical base. Along with being a singer-actress, she also became the composer of a song for the film ‘Didi’ on the request of Sahir Ludhianvi. Some movies, some names, some songs, some relationships get the dust of time. Let us tell you one such forgotten film anecdote.

‘If you forget me then you have this right’
All the songs of the film ‘Didi’ were composed by N Dutt, except the last and famous song ‘Tum Mujhe Bhool Jao To Yeh Haq Hai Tumko’. Few people would know that this song was composed by Sudha Malhotra. Actually, on the day the recording of this song was to take place, N Dutta suddenly fell ill. In such a situation, lyricist Sahir Ludhianvi talked to Sudha, she agreed to compose this song and the amazing thing is that she also created a great tune in just 24 hours. 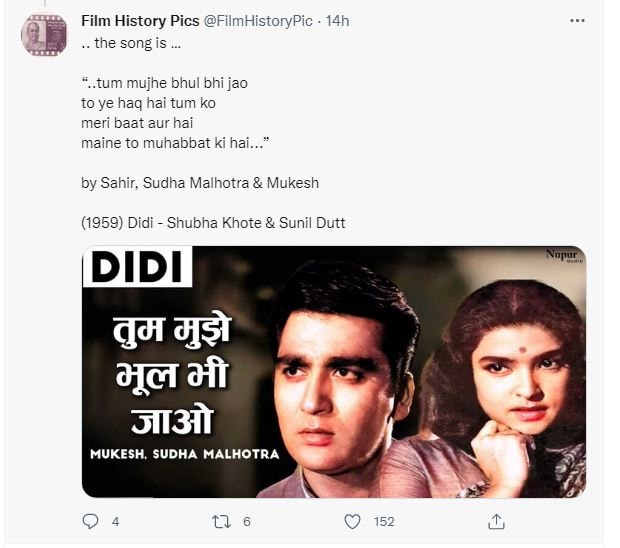 This song of the film ‘Didi’ was composed by Sudha Malhotra. Sunil Dutt and Shobha Khote were paired in this film. (Photo Credits: Film History Pics/Twitter)

soft voice mallika sudha malhotra
The very next day Sudha Malhotra and Mukesh also recorded this song. This song became a huge hit. A time has passed since this song was composed and recorded, but its passion remains intact even today. The specialty of Sudha’s singing was that the pronunciation was very clear, as well as a unique combination of elasticity and melody in the voice due to classical music training.

Sahir said to Sudha- ‘Let’s once again be a stranger…’
Sahir Ludhianvi was very fond of Sudha Malhotra. It is said that Sahir, who was unmarried throughout his life, had loved Amrita Pritam and Sudha Malhotra in his life. However, after marrying Giridhar Motwani, Sudha left the song and went home. It is said that Sahir’s famous song ‘Chalo Ek Bar Phir Ajbani Ho Jaye Hum’ was written when Sudha’s marriage was fixed.

Chiranjeevi and Salman Khan starrer Godfather will be streamed on OTT on this day, earns crores before release