Bollywood actor Sonu Sood, who became ‘Messiah’ by helping people during the lockdown, has continued his caravan of help. Even today he is helping the needy in every possible way along with his team. Recently he helped an Indian stranded in Thailand to return home. Sonu sent that person a plane ticket and arranged for him to come to India.

It all started when on June 11, a Twitter user named Sahil Khan tagged Sonu Sood in a tweet and asked for his help. Sahil wrote, “I am stuck in Thailand and there is no option to get out of here. Sonu sir, I request you to help me.” Sonu Sood replied to this tweet in just one day and said that he is going to send them tickets. Sonu wrote, “I am sending you the ticket. It’s time to meet your family.” Sahil thanks Sonu Sood
Sahil thanked the actor for his help by sharing a screenshot of this answer of Sonu Sood. She wrote, “Thank you so much Sonu Sood sir and your team. It means a lot to me.” Sonu did his work very actively and after two days Sahil came back to his country India. Sahil has shared a video thanking Sonu. At the same time, Sonu Sood has also shared a video of Sahil Khan and sent him a lovely message. Sonu Sood is being praised on social media
Sahil has Sonu Sood Tagged it and wrote, “Finally I reached India. I don’t have any words. I will always pray for your success. No one does what you have done for me these days. You are the real hero”. Responding to this video of Sahil, Sonu wrote, “Hindustani bhai ho humare… Had to bring back India.” This work of Sonu is being praised a lot on social media. This noble act of the actor wins the hearts of the people every time. 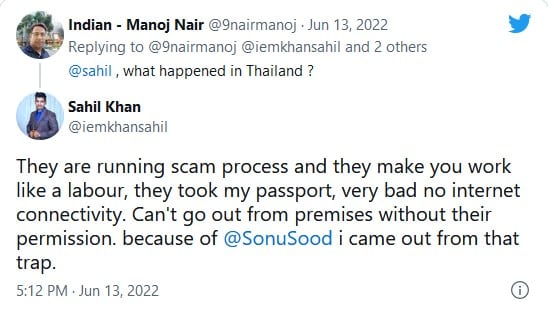 Why was Sahil Khan stuck in an East Asian country?
Meanwhile, people were curious to know the reason why Sahil got stuck in the East Asian country. To this Sahil replied that he was cheated in the name of job and his passport was also taken. He said, “My passport has been taken and now I cannot leave the premises without their permission. There is no internet connectivity either. Because of Sonu Sood, I was able to get out of that trap.”