Sushant Singh Rajput Sister Shweta Singh Share Emotional Note on his Death Anniversary: On the second death anniversary of Sushant Singh Rajput, his sister Shweta Singh Kirti wrote an emotional note in his memory. Sushant died on 14 June 2020. He was found dead at his Mumbai home. His untimely death shook the country. His death was being investigated by the CBI and the things coming out of the investigation were constantly making headlines. Fans are demanding justice for Sushant till date. His sister Shweta has also been raising her voice for justice on social media. On Sushant’s death anniversary, he urged the fans to light a lamp in his memory on Tuesday.

Shweta Singh Kirti shared a picture on Instagram in which Sushant can be seen talking to a little boy. The boy was selling balloons. Along with this picture, Shweta wrote an emotional note, “It has been 2 years since you left your mortal home, brother, but you have become immortal because of the values ​​you stood for.” 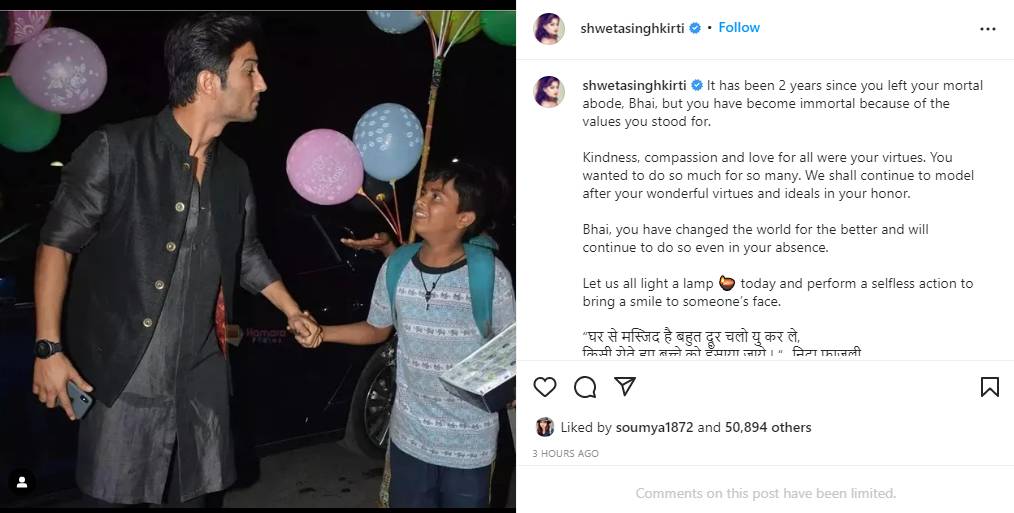 Shweta Singh Kirti further wrote, “Kindness, compassion and love for all were your qualities. You wanted to do a lot for many. We will continue to cherish your wonderful qualities and ideals in your honor. Brother, you have changed the world for the better and will continue to do so even in your absence.”

Shweta Singh Kirti appealed to light the lamp
While addressing the fans of Sushant Singh Rajput, Shweta Singh Kirti further wrote, “Let us all light a lamp today and do selfless work to bring smile on someone’s face.” At the end of his post, he has also written a lion of Nida Fazli – “There is a mosque far away from home, let’s do it like this,
Make a crying child laugh!”

Fans demand justice for Sushant Singh Rajput
On Sushant’s second death anniversary, fans are not only remembering their favorite star, but also Sushant’s fame by trending hashtags like ‘2 years of injustice with Sushant,’ ‘CBI fast track SSR case,’ and ‘support of Sushant Singh’. for ‘justice; are also demanding.