Shamita-Raqesh Breakup: The pair of Shamita Shetty and Raqesh Bapat emerged as the most romantic couple among the pairs of TV celebs last year. People were eagerly waiting for the marriage of both. But in the meantime, this couple has given a big blow to their fans. The couple has announced their breakup on social media.

The news of breakup came in the past

Some time back the news of separation between Shamita and Rakesh had surfaced. But the couple had called it a rumour. At the same time, Rakesh and Shamita themselves have surprised everyone by announcing their breakup. This pair made in ‘Bigg Boss OTT’ was very much liked by the people. People themselves saw the love between the two. But after 1 year, a rift started between the two and the relationship ended. 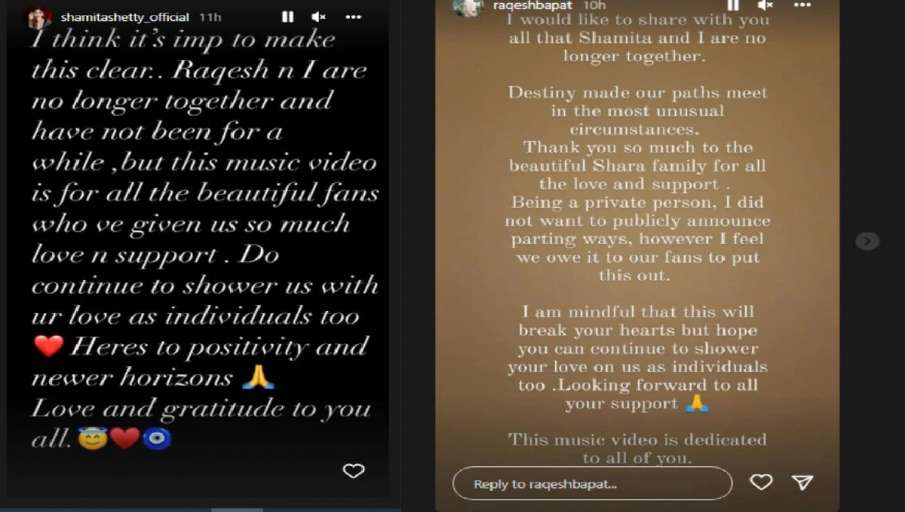 What did Shamita say to the fans

Giving the news of the breakup of this relationship, Shamita wrote on her Insta story, ‘I think it is necessary to tell … Rakesh and I are not together now … and have not been for some time, but this music video is for all those beautiful fans. For those who loved and supported us so much. Keep showering your love on us like this. That is positivity. Love and gratitude to all of you.’

As soon as Shamita’s post came to the fore, people started questioning Rakesh Bapat on this relationship. In response, he also confirmed this breakup on Insta Story. Rakesh has written, ‘I want to tell that now Shamita and I are not together. Luck met us in very unusual circumstances. Thank you so much #ShaRa family for all the love and support. As a private person, I did not want to announce publicly that we have split, although I felt that I should inform my fans. I know you will be heartbroken after this news but hope you keep on showering love despite your separation. Thank you for your support. This music video is dedicated to all of you.

Alia Bhatt breaks silence for the first time on the issue of twins, blames Ranbir Kapoor

Such is the love story of #ShaRa

Remind you that this pair was seen in ‘Bigg Boss OTT’. The two became friends and then friendship turned into love. Rakesh supported Shamita a lot, people liked her caring boyfriend look. After this, Shamita Shetty became a contestant of ‘Bigg Boss 15’, where Rakesh Bapat got a wild card entry as well. Even after ‘Bigg Boss 15’, this couple was seen spending quality time with each other.

Before appearing on TV, these stars belle papad, some became a waiter, some sold shoes