Taapsee Pannu on Mithali Raj: Mithali Raj, the captain of the women’s cricket team, is one of the best female cricketers not only in India but in the world. He has announced his retirement. On this, people are praising Mithali fiercely. At the same time, the biopic ‘Shabash Mithu’ on Mithali’s life is also going to be released soon. Bollywood actress Taapsee Pannu, who plays Mithali in this biopic, is also very much influenced by Mithali. As soon as the information about the cricketer’s retirement was received, the actress wrote an emotional note on social media, narrating the achievements of Mithali’s entire cricket.

Announcing her retirement from international cricket, Mithali Raj wrote on Twitter, ‘I think this is the right time to say goodbye to my career, because at this time the team is in the hands of very talented players and the future of Indian cricket is bright. ‘. On this, Taapsee Pannu fiercely praised Mithali.

Taapsee told the glorious sports history of Mithali
Taapsee Pannu wrote a long and wide emotional post by sharing a beautiful black and white picture with Mithali Raj on Instagram. The actress wrote, ‘Youngest captain in One Day Match (ODI) for the Indian cricket team. The only Indian cricketer to captain the team in 4 World Cups and reach the final twice. Youngest cricketer to score 200 runs in a test match. Highest run scorer Indian cricketer in debut international match. The only Indian cricketer to score 7 consecutive 50 runs in ODIs. Glorious career of 23 years. Some personalities and their achievements are beyond gender. You have changed the game and now it is our turn to change our perspective. Our Captain Mithali Raj forever recorded in history. For the next innings of life’ Heart emoji is shared with it. 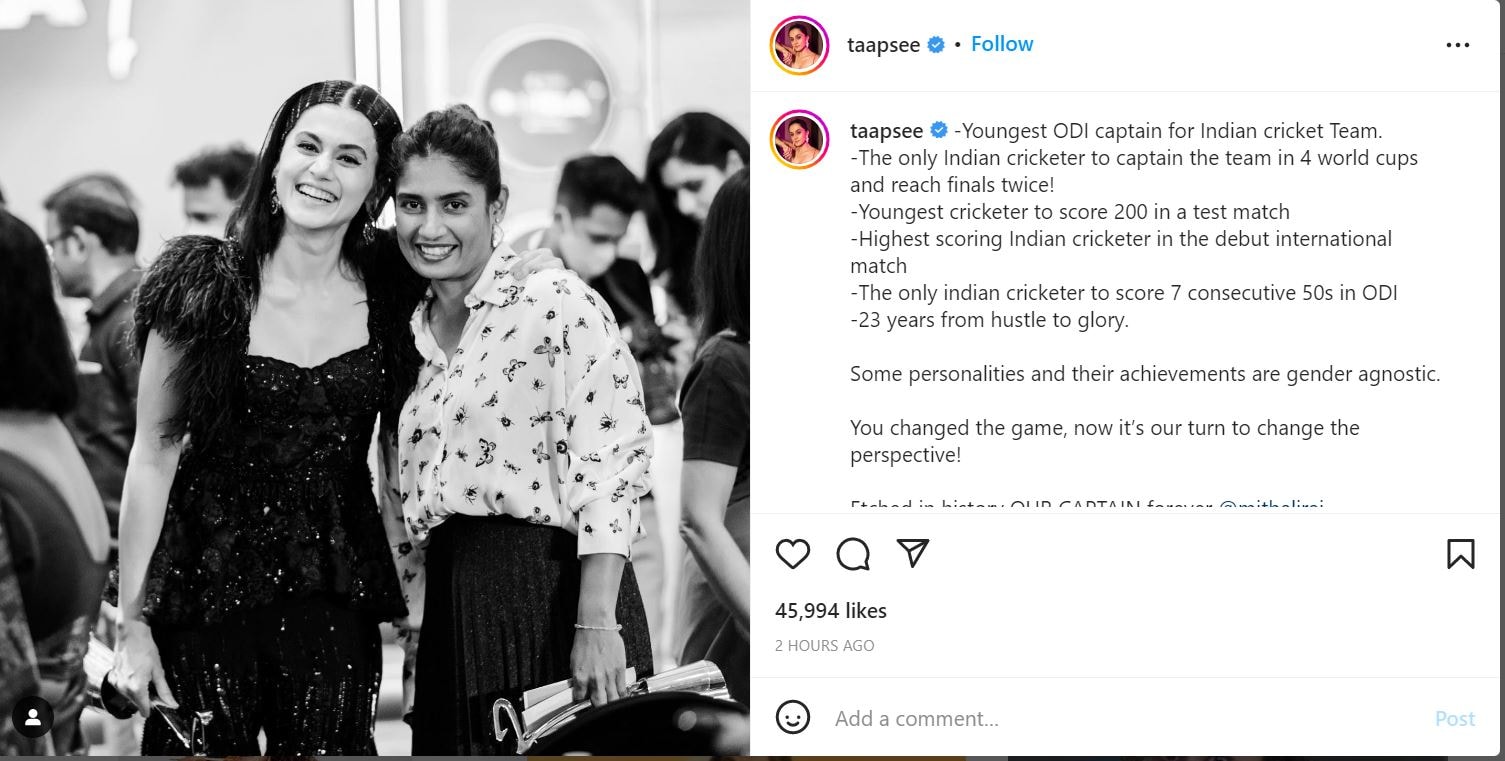 ‘Shabash Mithu’ releasing on July 15
Let us tell you that ‘Shabash Mithu’, a biopic on the life of Indian women’s cricket illustrious player Mithali Raj, is going to be released on July 15, 2022. In this, Taapsee Pannu will be seen bringing the story of Mithali’s cricket journey and her struggle to life on screen.