Sushant Singh Rajput Two years have passed since he left the world, but it is not easy to forget the late Bollywood actor who talked about the moon and stars. Not only fans and family, but Sushant, who stepped into Bollywood from TV, is also badly missed by Bollywood celebs who have worked together. Sara Ali Khan’s first film was with Sushant. The actress also learned a lot from Sushant during the shooting, which she is unable to forget.

Sara Ali Khan started her film career in the year 2018 with the film ‘Kedarnath’. Sara was opposite Sushant Singh Rajput in this debut film, since it was Sara’s first film and there was a good bonding while working with Sushant, so this film is very special for Sara. The actress is very emotional on Sushant’s death anniversary.

a lot happened the first time because of you
Sara Ali Khan has shared a beautiful picture on Instagram, in which she is sitting holding Sushant Singh Rajput and both are laughing. Sharing this picture, Sara wrote, ‘From facing the camera for the first time to seeing the moon and Jupiter with your telescope, a lot happened because of you for the first time. Thank you for giving me those moments and memories. Today in Full Moon Night, when I look up at the sky, I know that you must be spreading your glow among your favorite stars and constellations. Now and forever. Jai Bhole Nath’. 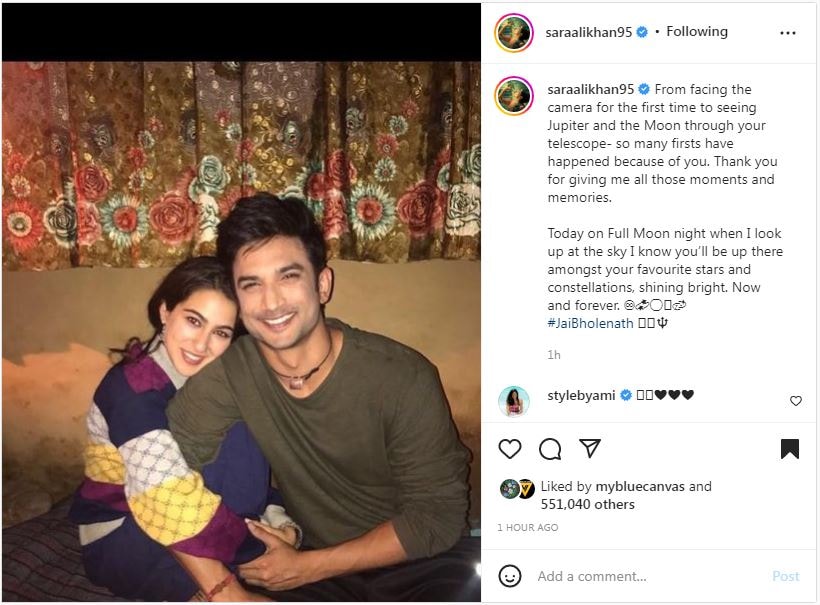 sushant singh rajput used to carry telescope
Sushant Singh Rajput used to look calm and shy, but once someone met him, he used to be his admirer. Apart from films on the set, Sara Ali Khan was also informed about the moon and stars. Sushant had a lot of interest in Astro Physics. For this interest, he bought an expensive telescope, which he often took to set shooting.

Also read- SSR Death Anniversary: ​​In the Sushant Singh Rajput case, the case is still entangled in the murder-suicide even after 2 years, the investigation continues

Late actor Sushant was unique in himself
During the shooting of ‘Kedarnath’, Sushant Singh Rajput used to give information about the sky and stars and constellations to Sara Ali Khan and also used to see through his telescope. Which actor usually does this, so Sushant was special.

OTT New Release: These shows web series are going to be released on Amazon Netflix and Hotstar this week