Bollywood Superstar Salman Khan condoled the death of Pandit Sukh Ram, grandfather of Aayush Sharma. He was a veteran Congress leader and former Union Minister and died on Wednesday. He was 94 years old and was admitted to AIIMS in New Delhi on 7 May after a brain stroke. Sharing a picture of him, Salman wrote, “My heartfelt condolences to him and his entire family on the passing away of Aayush’s grandfather Shri Sukhram ji.” He included the hashtag RIP and the joining hand emoji in his tweet.

Earlier, Aayush Sharma wrote a note remembering his late grandfather. He wrote, “With a very heavy heart I bid farewell to my dear Grandfather Pandit Sukh Ram Sharma. Even though you are gone, I know you will always be with me, guiding me, watching over me and blessing me as always. May your soul rest in peace Grandpa, you will be missed a lot. 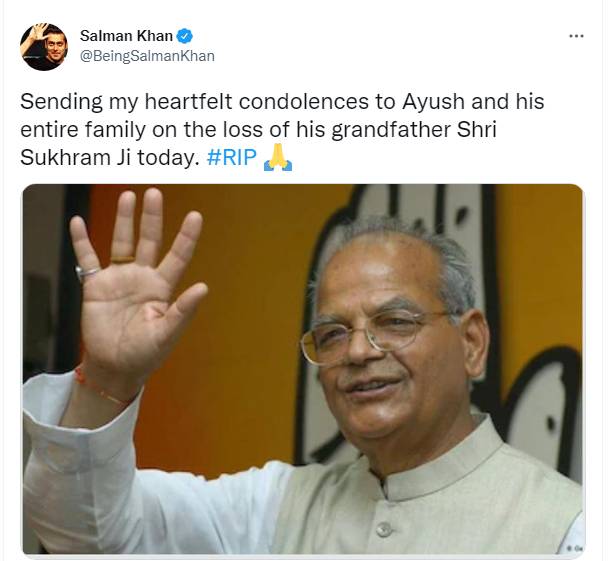 The news of Pandit Sukh Ram’s death was first shared by Ayush’s brother Ashray Sharma. He wrote on Facebook, “Goodbye Grandfather, the phone will not ring now.” According to PTI, Sukh Ram was the Union Minister of State for Communications (Independent Charge) from 1993 to 1996 and a member of the Lok Sabha from the Mandi constituency of Himachal Pradesh. 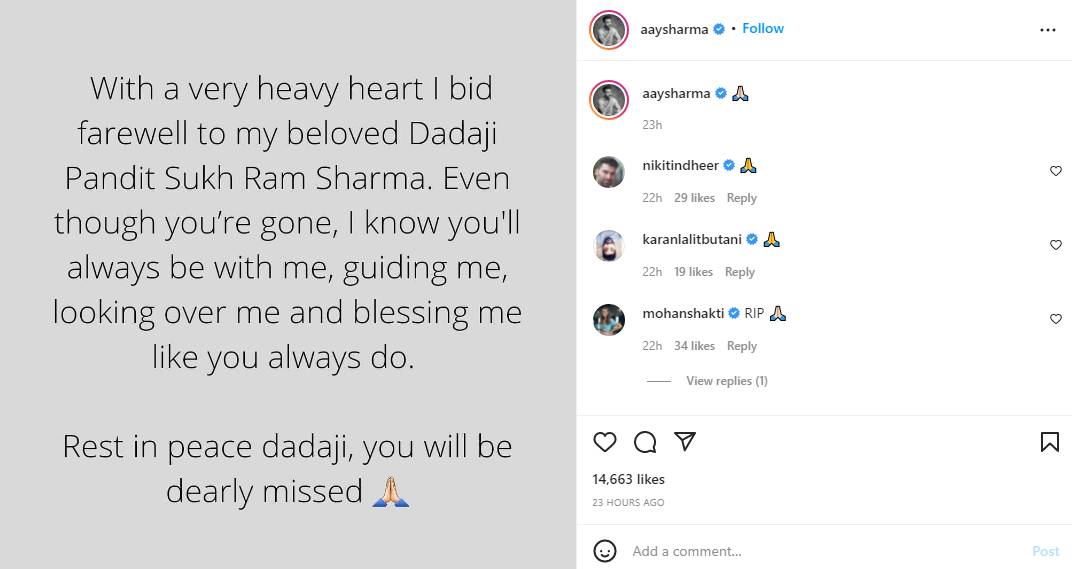 Pandit Sukh Ram won the assembly elections 5 times and Lok Sabha elections 3 times. Sukhram’s son Anil Sharma is a BJP MLA from Mandi. Ayush’s brother Ashray is also a politician. Sukh Ram served as the Minister of State for Defense Production and Supplies, Planning and Food and Civil Supplies. Rumors of Sukh Ram’s death had made headlines earlier this week.

However, Aayush Sharma immediately denied these rumours. He wrote, “My grandfather Pandit Sukh Ram is a strong soul and is fighting bravely. For all the reports and rumours, at this difficult time for our entire family, I request everyone to pray for their well-being and to refrain the media from paying attention to any false news. Thank you very much for all the prayers.”

Mahesh Babu's Sarkaru Vaari Paata a blockbuster on the very first day of its release, the audience told every scene tremendous