Bhojpuri actor and singer Ritesh Pandey is known for his singing and acting. Everyone eagerly waits for his songs and films. In such a situation, these days she is busy shooting her upcoming film ‘Sakshi Shankar’ with actress Richa Dixit. Meanwhile, now news related to its set is coming that the actor has got hurt during the shooting. And due to serious injury the shooting had to be stopped. He himself has informed the fans about this by writing a post on social media.

Actor Ritesh Pandey has shared a post on Facebook. Giving information about this, he wrote, ‘During the shooting today, there has been a serious injury in the leg, with the blessings of all of you, everything is fine now. (on rest)’ The shooting of the film has been stopped due to injury. He will soon recover and start shooting for it once again. Fans have expressed a lot of concern about the actor and are commenting fiercely. Praying for them to get well soon. One user wrote, ‘It is very sad, brother Mahadev, we are among the people to get you cured quickly’. Another wrote, ‘Wish you to get well soon brother, may the blessings of Mother Vindhyavasini always be with you’. The third wrote, ‘Take rest Pandey ji and at the same time give a lot of love to your little guest, this is a good time for you’. 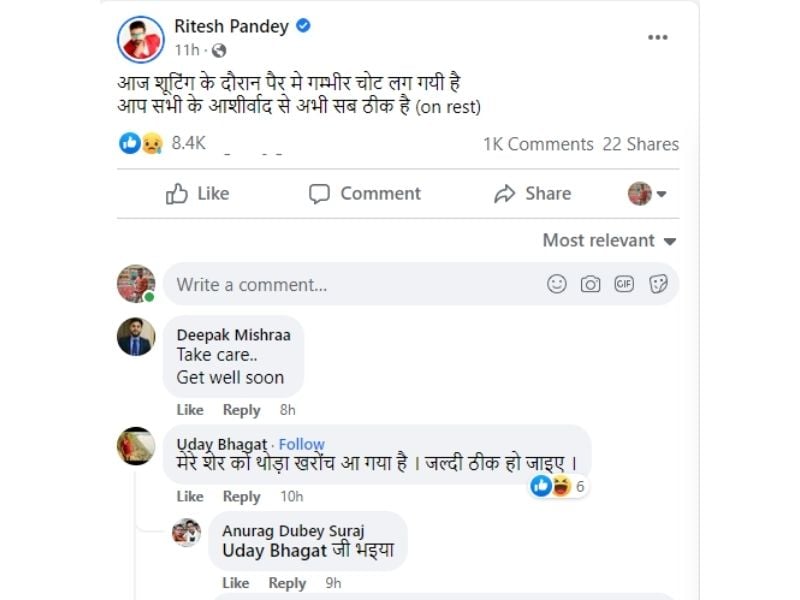 At the same time, another user wrote while enjoying, ‘Lee injury is an excuse, Ritesh Bhaiya has to spend some more moments with Bhauji… Get well soon’. Similarly, people are commenting fiercely on the actor’s post and wishing him a speedy recovery. More than eight and a half thousand people have reacted to his post and more than one thousand people have commented.

Richa and Ritesh Pandey will also be seen in ‘Mahavar’

Let us tell you that apart from ‘Sakshi Shankar’, the pair of Richa Dixit and actor Ritesh Pandey will also be seen in ‘Mahavar’. The trailer of this film and many songs have also been released, which has got a good response from the audience. Fans are quite excited to see their chemistry in this. In this movie, actress Chandni Singh will also be seen in the lead role, their trio has done wonders in the film. ‘Mahavar’ is a love story film. It is a clean and family film. It is directed by Dhiru Yadav and produced by Deepak Shah.

Why did Salman Khan take off his shoes on the stage? Now it is being praised on social media, know the matter

Irfan Pathan's job will be lost because of Ranveer Singh! Fans are reacting after watching the video of actor-cricketer

Seema Khan took this big step with divorce petition from Sohail Khan, you will be stunned to hear