South superstar Rana Daggubati, who has gained massive popularity for his portrayal of Bhallaldev in Baahubali. Apart from acting, people generally like his humble nature. But in a video that recently went viral, Rana was seen in a different kind of attitude, which some people are supporting and many are also trolling him. The actor had recently visited Tirupati temple with wife Mihika for a holy visit, where he was seen dressed in traditional attire. The video of the temple visit is being widely shared on social media.

Actually, as soon as people saw Rana Daggubati near the temple, they started chasing him to get a glimpse. Then a fan insisted on clicking a photo with him but Rana refused and moved on. In the video, a fan can be seen approaching the actor for a selfie, but the Baahubali star’s attitude left a lot of people stunned. Rana snatched his phone and avoided clicking. Some people took his attitude in a wrong way and called him rude. So everyone supported him too. The video has been shared by HT City, on which many people are reacting against Rana.

In a recently released clip, Actor @RanaDaggubatiwho recently visited the #Tirupati temple along with wife #miheekaBajaj & his father #DSureshBabusnatched a fan’s mobile phone away after he approached the actor for a selfie #ranadaggubati #WATCH pic.twitter.com/8lxIPGiqly

One fan wrote, ‘You don’t want a selfie with a fan but you want to pose for the media #BoycottBollywood #BoycottTollywood @RanaDaggubati.’ At the same time, another commented, ‘By selfie, they are not losing their self-esteem, but they get popularity.’ Another Telugu Twitter user wrote, ‘Temple lo selfie digakodada? phone pull chestva ?? Last Seen Lo Andari Tho (Balaji Mandir Employee) So Nuvvu Djina Pix Anti Mari? Avi Gudi lo sang? Akkada celebrity la ninnu chusina valla ni kuda suspend cheyali..bycottrana.. who is it? He doesn’t even know…’ In this way, people from all the North and South have trolled him and boycotted him. 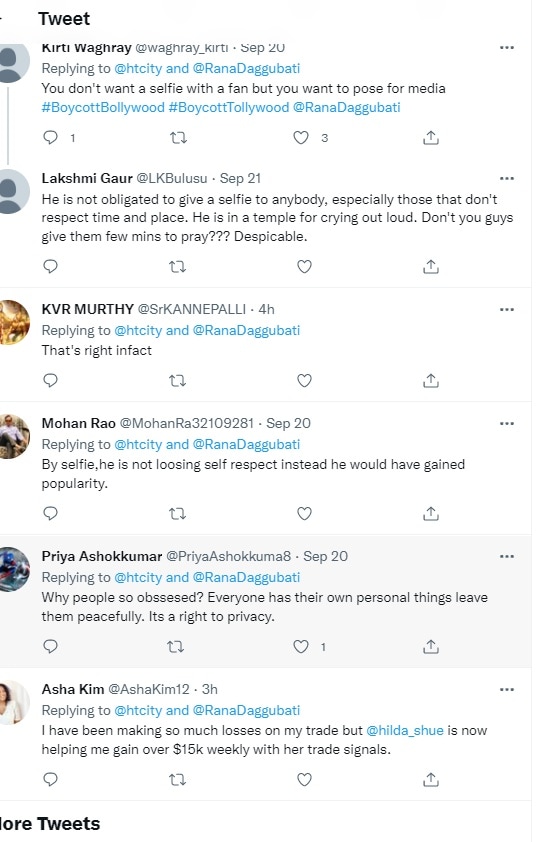 Some fans also came in support of Rana

On the other hand, a group of people came in support of Rana Daggubati and wrote, ‘He is also human, he also has problems, he needs peace.’ Another supporter wrote, ‘Everyone has their own privacy…nothing wrong with it, taking selfies without their permission is wrong.. While another Twitter user commented, ‘It’s okay to enter someone’s personal space Not there.’ By the way, let us tell you that Rana has taken a break from social media since his marriage anniversary and he has also deleted all the posts from his Instagram. In such a situation, it may be that he does not want anyone to share the post related to him on the Internet and that is why he did not give a selfie to the fan.

SS Rajamouli breaks silence on trolls for showing villains to British in RRR, said this

Neha Sharma Pics: 'I don't even care about the name'...