Vijay Deverakonda (Vijay Devarakonda) and Ananya Panday’s acting film ‘Liger’ is being shown on OTT from Thursday 22 September. The film was released nationwide on August 25 on the big screen, now it is being streamed on Disney + Hotstar. ‘Ligar’ is available to watch and download online in HD in Telugu, Tamil, Kannada and Malayalam.

Viewers who could not watch ‘Liger’ in theaters at the time of its release on August 25, can now enjoy it from the comfort of their homes. The streaming rights of ‘Liger’ have been bought by Disney+Hotstar and it has premiered on the platform. On TV, it will be released on Star Gold and Star Gold 2. 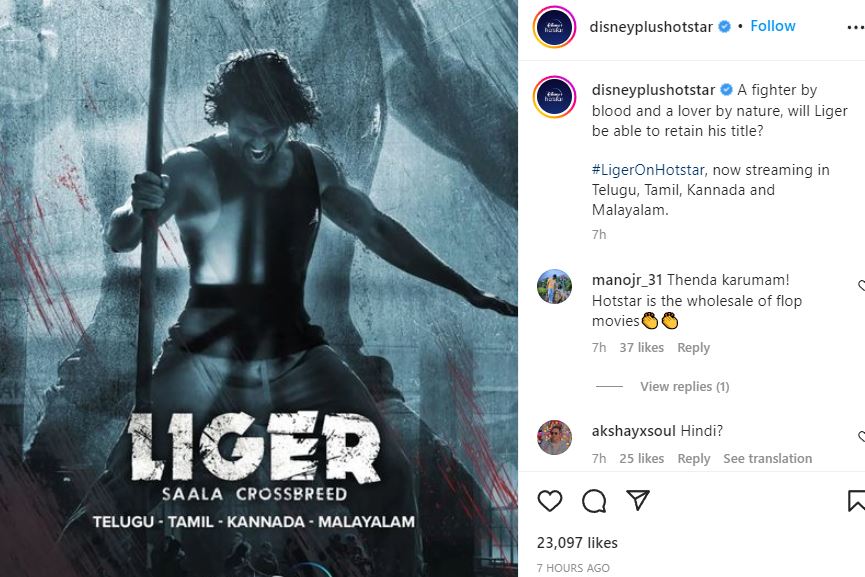 ‘Liger’ streaming on Disney+ Hotstar
Disney+ Hotstar announced the OTT premiere of ‘Liger’ by sharing a social media post. The post was captioned as, ‘Fighter who is a lover by nature, will Liger retain his title? ‘Liger’ is now streaming on Disney+Hotstar in Telugu, Tamil, Kannada and Malayalam. Let us tell you that the Hindi version of the film has not been released on any OTT platform yet and many fans asked when ‘Liger’ will be released online in Hindi.

How viewers will be able to watch ‘Liger’ online
If viewers want to watch or download ‘Liger’, they have to become a premium member of Disney+Hotstar. Those who are subscribers to Disney+ Hotstar’s Super plan can also watch Liger. ‘Liger’ features Vijay Deverakonda as a tea seller who fulfills his dream of becoming an MMA champion. Ronit Roy is playing the role of Vijay’s mentor. Ramya Krishnan plays Vijay aka Liger’s mother in the film, while Ananya Panday plays his girlfriend Tanya. ‘Liger’ shows Vijay in a very different avatar.

Music launch of 'Bera-Ek Aghori', songs of the film are being praised