Ranbir Kapoor and Alia Bhatt’s ‘Brahmastra’ is constantly wreaking havoc at the box office. Everyone is praising the film. At the same time, the chemistry of Alia and Ranbir in the film was also well received by the audience. However, actor Kamal R Khan, who called himself a critic, ie Kamal Rashid Khan, called this film directed by Ayan Mukherji the most ‘disaster’. The film is dubbed. KRK has tweeted on being unable to review ‘Brahmastra’ due to being in jail.

Let us tell you that due to his old tweet and because of the case of torturing a woman, KRK has recently come to jail for 9 days. As soon as he comes out of jail, he is taking a jibe at Bollywood stars and venting his anger. KRK first targeted filmmaker Karan Johar as soon as he was released from jail. Along with this, he has taken a dig at Ranbir Kapoor and Alia Bhatt’s film ‘Brahmastra’.

KRK took a jibe
Describing the film ‘Brahmastra’ directed by Ayan Mukerji as a disaster, KRK wrote in his recent tweet, ‘I did not review the film Brahmastra, yet people did not go to the theater to see it. So it became a flop film. Hope Karan Johri doesn’t blame me for the film’s failure like many other Bollywood people did. 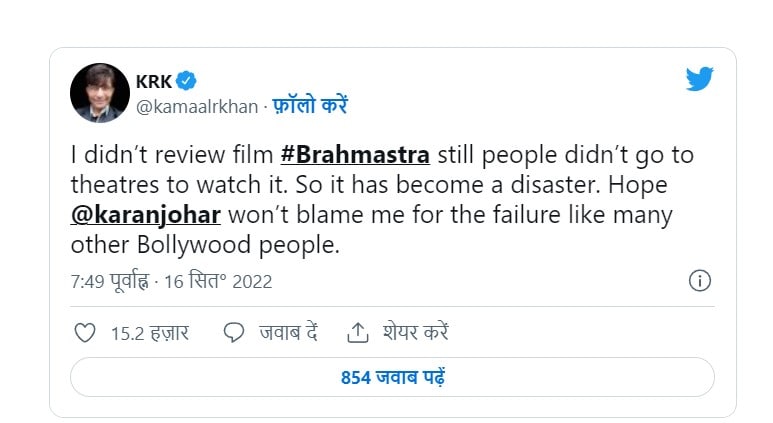 PICS: Producer Ravinder arrived for honeymoon with Mahalaxmi, people made fun of it, the actress gave this answer