Kareena Kapoor Khan Along with her films, she keeps on doing get-together with her family and friends. Bebo had organized a grand party on her 42nd birthday too. Kareena’s birthday party took place at her Bandra house in Mumbai. At this house, close friends and family members of Kareena reached and had a party. Many videos and photos of stars going to Kareena’s house went viral on social media. Now Kareena herself has shown a glimpse of her house where the party took place.

Kareena Kapoor Khan has shown an unseen picture of her luxury home to the fans by sharing a picture on her Insta story on Friday. The actress has thanked Balloon Decor Company by sharing the picture.

Kareena had a birthday party here
In the picture, the dining area built on the rooftop of Kareena Kapoor Khan’s house is visible. The wooden furniture looks sober covered with white colored covers. Indoor plants are adding to the beauty of this place. Colorful balloons are visible. The decor of the place is simple yet relaxed. Sharing the photo of this place, the actress wrote in the caption with emoji ‘Thank you @groomgroomballon’. 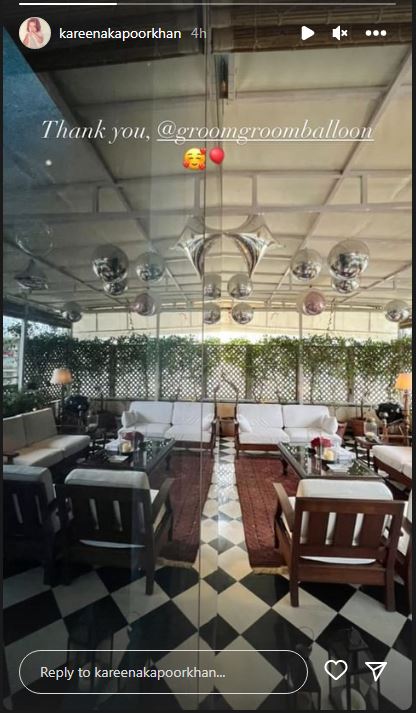 Bebo celebrated 42nd birthday with pomp
Let us tell that at Kareena’s birthday party, Malaika Arora was always in the news due to her glamor style, while Alia Bhatt and Ranbir Kapoor were also seen in a cool style. Apart from these, celebs like Soha Ali Khan, Kunal Khemu, Karan Johar, Manish Malhotra, Maheep Kapoor and Sanjay Kapoor attended. A picture on Kareena Kapoor’s birthday was shared by sister Kareena Kapoor on Insta Story. In this picture, Kareena was seen cutting the cake with her younger son Jeh in a white dress.

Talking about Kareena Kapoor’s workfront, she was seen in ‘Lal Singh Chaddha’ with Aamir Khan. She will soon be seen in Sujoy Ghosh’s ‘The Devotion of Suspect X’ with Jaideep Ahlawat and Vijay Verma. It will stream on Netflix.

VIDEO: Fans fell on barricades in the process of taking photos with Ranbir Kapoor, actors ran for help on sight