Avyan Azad Rekhi, son of Bollywood actress Dia Mirza, has turned a year old today on 14 May. In such a situation, he has written a special and emotional post on his son’s first birthday. In his post, he has told that when his son was born, the song ‘Imagine’ was playing. Along with this, the actress has shared a lovely monochrome picture on her Instagram. On Diya’s post, Bollywood stars and fans are commenting on Avyan’s post congratulating him on his birthday.

Let us tell you that Dia Mirza welcomed son Avyan as her first child with her husband Vaibhav Rekhi last year. However, Avyan’s journey was difficult in the early days of his birth. He had to undergo life saving surgery. However, now Diya considers Avyan a miracle.

In the photo, Diya is seen holding her son in her lap and her son is seen holding the finger of his father Vaibhav Rekhi. At the same time, Diya is also smiling after seeing her baby holding the hand of husband Vaibhav. Bollywood stars are also commenting on Diya’s post. Actresses Esha Gupta and Sagarika Ghatge, Sophie Choudry, Gul Panag, Bipasha Basu, Gauahar Khan also shared a heart emoji and gave love to Avyan and called Diya a strong mom. 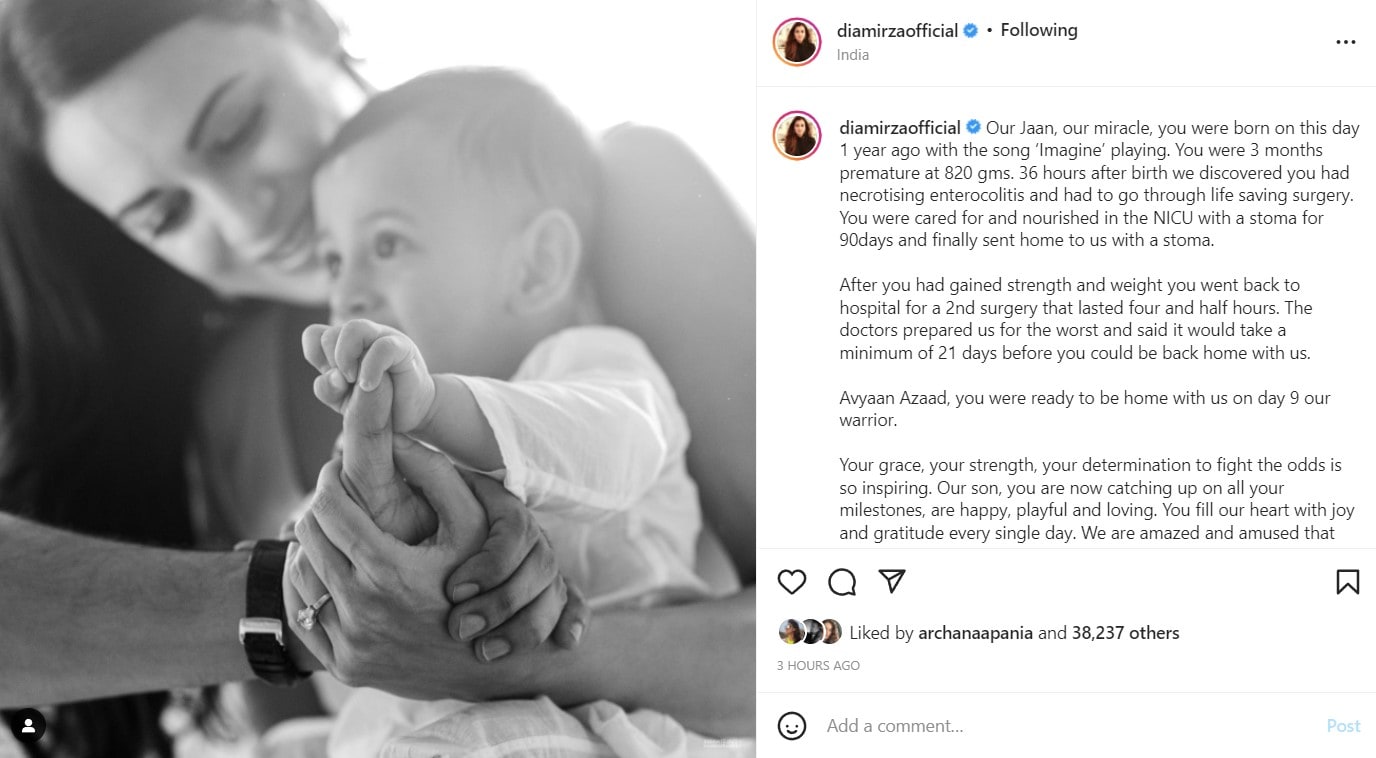 had to undergo life saving surgery
Congratulating Avyan on his birthday, Diya wrote in the caption- “Our love, our miracle, you were born on this day 1 year ago with the song ‘Imagine’. You were 820K grams before 3 months’ time. 36 hours after birth, we learned that you had necrotizing enterocolitis and had to undergo life saving surgery. You were cared for and nurtured for 90 days in the NICU and finally sent home to us with a stoma.”

warrior told son
Diya further wrote, “After gaining strength and weight, you went to the hospital for another surgery, which lasted for four and a half hours. The doctors prepared us for the worst case scenario and said, it will take at least 21 days for you to come back home with us Avyan Azad, you were ready to come home with us on the 9th day our warriors. ,

Know what his son said first
Diya has further told in the post that her son was the first to say the word ‘Tiger’. At the end of the post, he has expressed his gratitude towards the doctors and nurses. He wrote, “We are grateful to all your doctors and nurses for taking such good care of you. Avyan Azad, you have inherited a world that will depend on your love, grace, empathy and kindness. Make your own way, our dears. Just like you do everyday. Always remember that we love you dearly. Happy birthday our son. Thank you for coming into our lives.”