In the very first week of appearing in ‘Bigg Boss’, Ishaan and Maisha got closer.

Nothing was going well between the two, so now they parted ways.

reality show ‘Bigg Boss’ is very popular among the audience. Here on the one hand there are disputes between the contestants, while on the other hand, love is also seen between the contestants here. Many couples have been formed during this reality show, whose love increases after coming out of the house. At the same time, there are some couples who make distance from each other after some time. One such couple is Ishaan Sehgal and Maisha Iyer. Both have recently given official information about their breakup.

Maisha Iyer and Ishaan Sehgal were seen in the 15th season of ‘Bigg Boss’. While living together, both had come close to each other. Their love blossomed during the show. The chemistry of both had also attracted the audience. Even after coming out of the house, this couple remained together for several days. Their fans were waiting for the marriage of both, but the news of their breakup has upset the fans.

Salman Khan gave advice
Ishaan and Maisha have officially told that from now on both of them have parted ways. tell that ‘Big Boss’ Ishaan and Maisha got closer in the very first week of coming in. The closeness of both was increasing every day. In such a situation, once the host of the show Salman Khan had given advice to both of them. Discussions of the love of both started happening at home and outside. Fans started calling both of them ‘Myshaan’. Although both were out of the show soon. 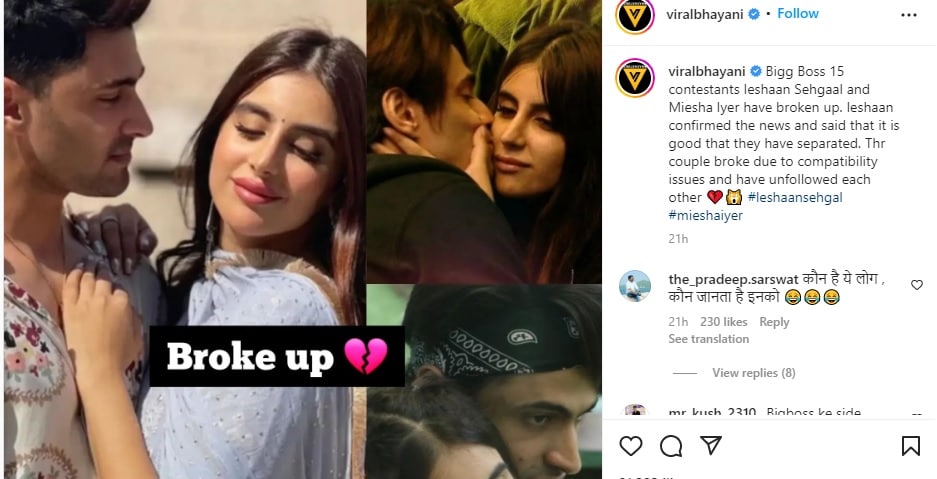 Both want something more from life…
When Ishaan Sehgal and Maisha Iyer decided to part ways, Ishaan shared a long post on his social account. Ishaan wrote that we both want something more from life. I have given a lot in this relationship but after coming in and out of the house a lot of things have changed. Some things are not working between us. I have a feeling that both of us were not meant to be together and this relationship does not work till further time. It was good that we both parted ways.

On the other hand, Mysha Iyer has also said that something was not going well between the two, so both are now separated.

40 Years Of Nikaah: Boycott's appeal was made even years ago, to avoid the ruckus, the film was named 'Nikah'

These stars are away from limelight even after winning ‘Bigg Boss’