Bhojpuri film star Akshara Singh is one of the highest paid actresses in the industry. He has many hit films as well as music videos in his account. Apart from acting, Akshara also sings songs. Recently Akshara was in news when she interviewed Aamir Khan for ‘Lal Singh Chaddha’. He described it as a dream come true. Apart from films, Akshara is also very active on social media. Now she shared a glamorous photo of herself.

Akshara shared her photo in a black gown with fans and followers. Golden work has been done on her gown. She has kept her hair open and is giving a killer look. Akshara captioned this photo of her, ‘Some people call it obsession, I call it self love.’

Thousands of likes have come on Akshara’s post in a few hours. One of her fans said, ‘My all time favorite actress Akshara ji.’ One user wrote, ‘Mind blowing.’ Another said, ‘You are looking very beautiful ma’am.’ One wrote, ‘Self love is what makes you happy.’ A fan says, ‘Bihari lady garda blown diya aapne toh’. 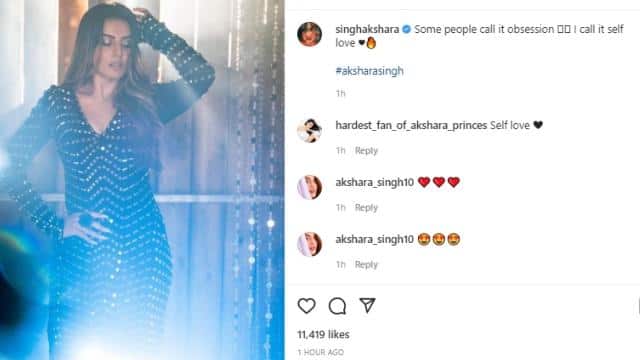 Akshara Singh made her debut in 2010 with the film ‘Satyamev Jayate’ opposite Ravi Kishan. The next year in 2011, she appeared in the film ‘Pran Jaye Par Vachan Na Jaye’. His main films are ‘Balma Bihar Wala’, ‘Satya’, ‘Transferred’ and ‘Maa Tujhe Salaam’.

EXCLUSIVE: Alia Bhatt gave an interesting answer to the trolling of the song 'Kesariya'- 'The song is a hit!'