Ajay Devgn, Shriya Saran, Tabu and Ishita Dutta are all set to create magic once again in ‘Drishyam 2’. The shooting of the film has been completed in Hyderabad. After the shooting is completed, the makers have announced its release date. The film will be released in theaters on 18 November 2022. Ajay played the role of Vijay Salgaonkar in the film. This film was well liked. ‘Drishyam 2’ is going to be more of thrill, drama and excitement than the first part. The story of Vijay and his family is beyond people’s imagination.

The film has been directed by Abhishek Pathak. Apart from Ajay Devgn, Tabu, Shriya Saran and Ishita Dutta, it also stars Rajat Kapoor and Akshaye Khanna. The shooting of the film has been completed in Hyderabad. Let us tell you that except Akshaye Khanna, all the actors were also in ‘Drishyam’. Makers have cast Akshay in the film for a new role. 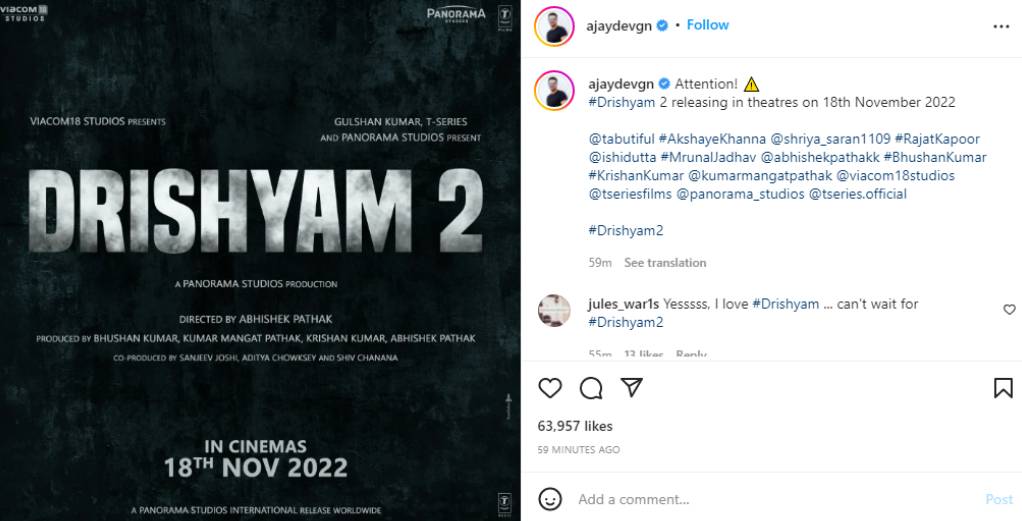 According to reports, Akshaye Khanna will reportedly be seen playing the role of a cop who is Tabu’s close aide and helps her in the investigation. Akshay’s character in the film will be a tough, smart, sensible, sharp cop, who will interrogate and investigate Ajay’s character.

Ajay Devgan and Akshaye Khanna working together after 12 years

The report also states that Akshaye Khanna is not in a supporting role in the film, but in a fitting role which has been written just for him and which will probably be different in terms of his impact and performance. This will be Ajay and Akshay’s fourth film together. Earlier, both had worked together in ‘Aakrosh’. They are working together in the film after a long time of 12 years. The two also worked together in ‘Deewangi’ and ‘LOC’.

Preparation for the last schedule of ‘Drishyam 2’ begins, Ajay Devgan will shoot the film in Hyderabad

‘Drishyam 2’ to release on November 18

‘Drishyam 2’ is presented by Viacom 18, Gulshan Kumar, T-Series and Panorama Studios. The producers of the film are Bhushan Kumar, Kumar Mangat Pathak, Abhishek Pathak, Krishna Kumar. It is co-produced by Sanjeev Joshi, Aditya Choksi and Shiv Chanana. The film will be released in theaters on 18 November 2022.