Urfi Javed Social media has remained a sensation because of her dresses. Hardly any celebrity has been seen so far in a dress like Urfi. Urfi gives a public appearance by wearing a dress designed from anything. After blade, newspaper, photo, polythene, Urfi has got a new outfit that is also made of SIM card. Urfi has shared a photo on social media wearing a crop top and skirt made of SIM cards, as well as shared the whole story by sharing the video.

Urfi Javed Urfi Javed has again surprised with his dress. The actress is seen in such clothes, which you cannot even imagine. Now Urfi has got a photoshoot done wearing this yellow and blue dress made of 2000 SIM cards and shared it on her Insta story and the caption reads ‘Can you believe this is made of SIM cards’ . 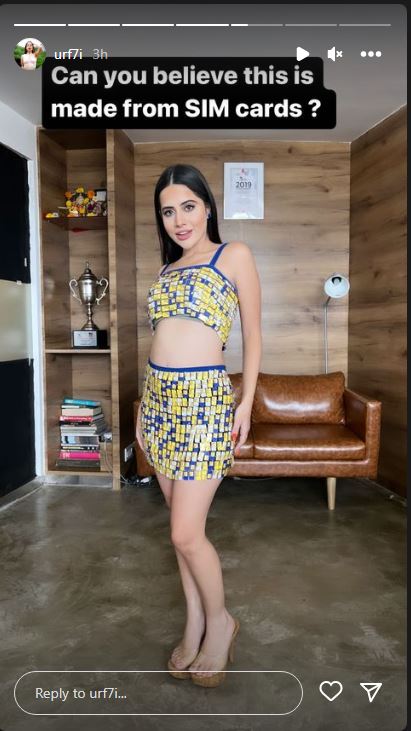 This is the story of Urfi’s dress with SIM cards
Now let us tell from where did Urfi get this dress and who gave it. Urfi has also shared a video on his Instagram. In which she is seen getting a photoshoot done in a designer dress of white color. Meanwhile, a boy and a girl come, tell Urfi that a designer dress has been made for them. Seeing this dress made of 2 thousand SIM cards, Urfi becomes happy and wears it and gets stuck. Actually, this video is from the promotion of ‘Jamtara’ Season 2, in which it is being told that Urfi Javed has been cheated in the name of stylish dress. Watch Urfi’s funny promotional video.

Also read- Urfi Javed discovered the girl who designed the dress from the newspaper, you too will be stunned to see the talent!

Let us tell you that ‘Jamtara’ season 2 web series is being streamed on Netflix from 23 September. The first season of this series, a cocktail of suspense thriller and crime, was very much liked. The promotion of the second season has been done with Urfi.

Pakistani actors were blown away everywhere, fans also heard the truth, know why the ruckus is happening

Nupur Shikre, the son-in-law of Aamir Khan is Gym Freak, has done nude photoshoot before Ranveer