New Delhi: Pandit Sukh Ram Sharma, the grandfather of Bollywood actor Aayush Sharma, has passed away. He was admitted to the hospital a few days back due to brake stroke. Where he was being treated but on Wednesday he breathed his last. Aayush Sharma himself informed about this news on Instagram.

Let us tell you that on Tuesday itself, Ayush Sharma had clarified on the rumors of his grandfather’s death and said that he is currently under the care of the doctor. However, now in the new post, he informed the fans about the death of his grandfather.

Aayush Sharma wrote on Instagram, ‘With a heavy heart I said goodbye to my dear Grandfather Pandit Sukh Ram Sharma. You are no more in this world but I know that you are always with me, will guide and bless me as you have always done. Rest in Peace Dadaji, we will all miss you a lot.

It is known that Ayush Sharma’s grandfather was a well-known politician. He had also been a minister at the Centre. 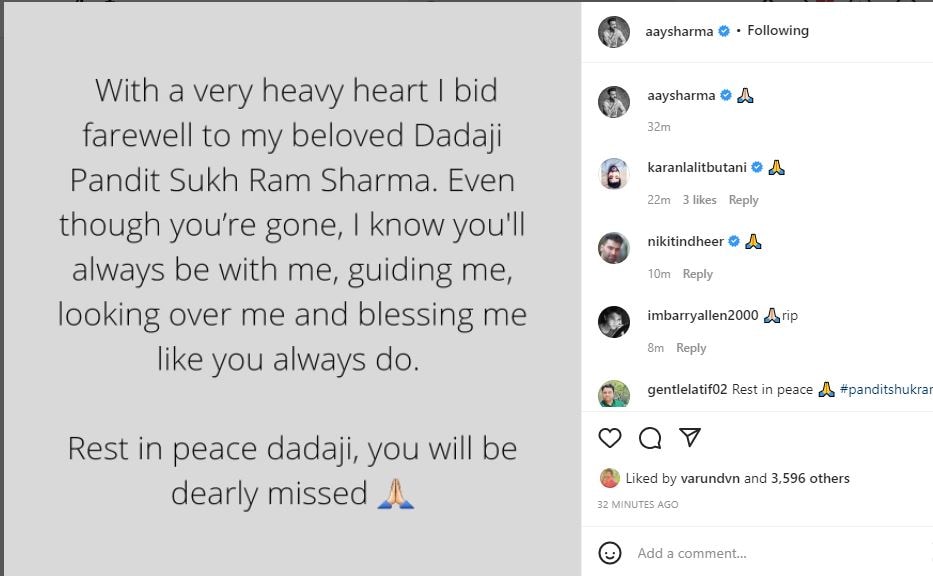 Aayush Sharma himself informed about this news on Instagram. ( aaysharma/instagram )

Rumors were dismissed
Let us tell you that on Tuesday too, Aayush Sharma had posted on the rumors of his grandfather’s death. Ayush Sharma wrote, ‘My grandfather Pandit Sukh Ram Sharma is a strong man and is fighting back with bravery. For all the reports and rumours, at this difficult time for our entire family, I request everyone to pray for their well being and to refrain from paying attention to any false news from the media. We will keep you updated and informed about his health every step of the way. Heartfelt thanks for all the prayers.’

Dhinchak Pooja makes a comeback with the song 'Ek Aur Selfie Lene Do', getting funny reactions on social media

The pictures of Sonakshi Sinha that sparked the news of engagement, now the real issue has come to the fore...