42 Years of Qurbani: The film ‘Qurbani’, directed by Feroz Khan, was released on 20 June 1980. Feroz Khan, Vinod Khanna, Zeenat Aman were in the lead role in this film, while well-known villains Amjad Khan, Kader Khan, Amrish Puri, Shakti Kapoor, Mac Mohan were also there. There were also comedy actors Tuntun, Jagdeep and Aruna Irani. There is definitely some anecdote behind every film making. Firoz’s son Fardeen Khan made an interesting disclosure on the 42nd year of ‘Qurbani’.

The film about which Firoz Khan was horrified 42 years ago became the highest-grossing film of 1980. He had shed all his blood and sweat in the making of the film ‘Qurbani’. The success of the film not only cleared all his doubts but also kept his trust intact. For Firoz, this moment was nothing less than magic.

Firoz Khan had put everything at stake
Firoz Khan’s son Fardeen Khan is also an actor and has been away from films for a long time. On the 42nd year of the release of the film ‘Qurbani’, Fardeen Khan tweeted about his father’s fear and wrote, ‘It has been 42 years since the release of Qurbani. In the words of Firoz Khan, ‘Son, I even put my last shirt at stake to make this film. Had it not worked, we would have been on the road. People don’t know that it takes blood, sweat, tears to make a film. 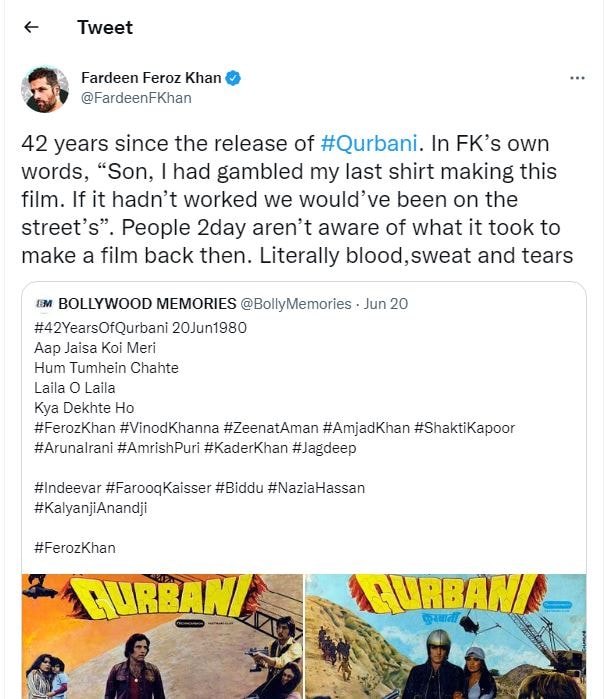 The music of ‘Qurbani’ created a buzz
The film ‘Qurbani’ was also written by Firoz Khan along with KK Shukla. The film was decorated with music by the duo of Kalyan ji-Anand ji. The songs of the film ‘Laila O Laila’, ‘Aap Jaisa Koi Meri Zindagi Mein Aaye’, ‘Hum Tumke Chahte Hain’ are tremendous hits and are still popular today.

Not only Shilpa-Malaika, Jaya-Hema and Rekha also do yoga, seeing these actresses also deceives their age

Katappa's daughter is not less than anyone in terms of beauty