Ajay Devgan The starrer film ‘The Legend of Bhagat Singh’ has completed 20 years. This film, directed by Rajkumar Santoshi, was released on 7 June 2002. Although this film could not show anything special at the box office, it was appreciated by critics all over the world including India. In the year 2002, three films were made on Bhagat Singh within 3 months. Apart from ‘The Legend of Bhagat Singh’, Bobby Deol starrer ’23 March 1931: Martyr’ and Sonu Sood starrer ‘Shaheed-e-Azam’. However, Santoshi’s film was different.

Apart from Ajay Devgan in this film of Rajkumar Santoshi, Farida Jalal, Raj Babbar, Sushant Singh. There were supporting actors like D Santosh and Akhilendra Mishra. Santoshi had worked hard in selecting the actors for small roles in ‘The Legend of Bhagat Singh’. For this auditions were done in many cities including Delhi to Lucknow.

Ajay Devgan received the National Award
The audience was stunned in the theater by AR Rahman’s patriotic songs. Songs like ‘Mera Rang De Basanti Chola’, ‘Des Mere Des Mere’ and ‘Sarfaroshi Ki Tamanna’ have remained the favorite patriotic songs of the people for more than 20 years. Ajay Devgan received the National Award for this film and the actor considers this role of a young revolutionary very close to his heart. On the 20th anniversary of the film, Ajay took to Twitter to express his gratitude for the film.

The film is close to Ajay Devgan’s heart
Ajay Devgan wrote on Twitter, ‘Even after 20 years, #The Legend of Bhagat Singh is a film that I am proud of. The spirit in this is for me and for every Indian forever. Grateful to be a small part of this memorable film. Jai Hind’. 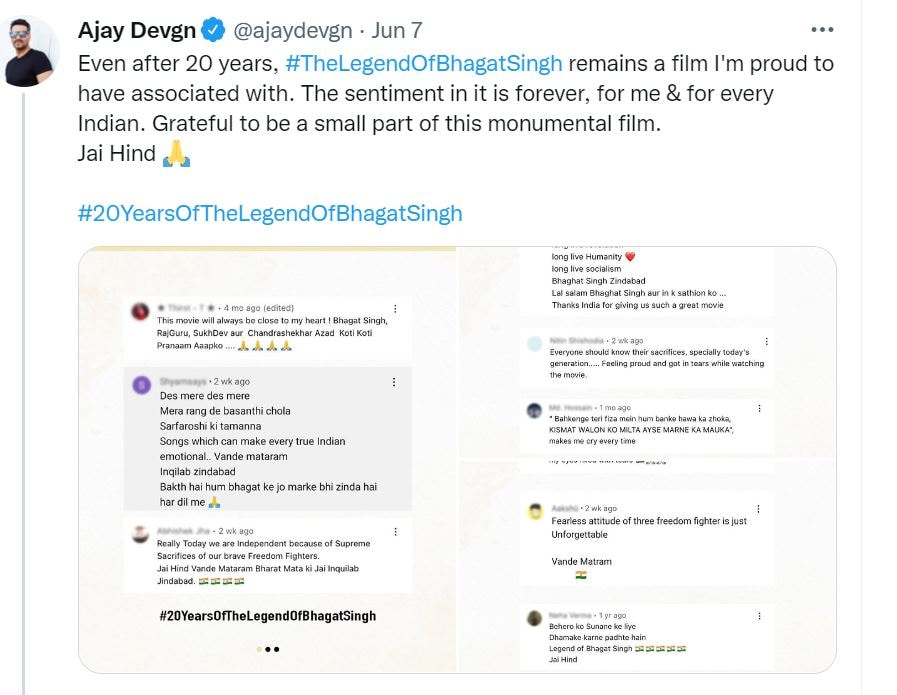 Also read- If you copied the style of Bollywood actor Ajay Devgan, then the young man reached the lock-up, see, VIDEO